While luxuriating in Tahiti, Twitter CEO Jack Dorsey made a shameful but bold decision: He removed thousands of conservative voices from his platform, including GrrrGraphics. Our mass violation? We were all pro-Trump. Dorsey lied and said we were promoting violence while he allowed ‘hang Pence’ messages to stay.

Not to be outdone, Jeff Bezos also ‘cleansed’ the Twitter alternative, Parler, from his company’s cloud servers. Trump supporters are now being smeared as ’terrorists’ by the far left mega billionaires.

Throughout 2020, Facebook was busy censoring conservative voices on their platform. Mark Zuckerberg is good friends with China’s President Xi. Zuckerberg speaks Chinese. He asked Xi to name his child. Zuckerberg clearly interfered with the election by refusing to allow any comments or links to Hunter’s notorious laptop. Facebook went the Hillary route of lying and said (with zero proof) that it was ‘Russian disinformation.’

SUPPORT OUR CARTOONS URGENT WE WILL NOT STOP FIGHTING FOR YOU!

Try using Google for any searches of conservative opinions and you’ll see page after page of leftist opinions stating why conservatives are wrong. Goggle does evil and it’s now nothing more than a socialist propaganda arm—not a search engine.

Many on the left claim it’s perfectly fine for these CEOs to burn conservative opinions. After all, they are private companies and can do whatever they want. Not exactly. They are publicly-held companies. Today Twitter’s stock got slammed and rightfully so. Let’s hope the mega billionaires are all taken down a peg or two, but more importantly, we all need to point out the hypocrisy of the left for blatantly violating our First Amendment.

The lefty mega billionaires know their plans for us are unpopular. Their ideas don’t stand up in the marketplace of ideas, so they want to limit and control that marketplace.  They know this is not aligned with our Constitution, but they don’t care. They admire the Chicom system more. Hence their naked display of reckless power.

They must be awfully afraid if they’re resorting to silencing millions of Americans. 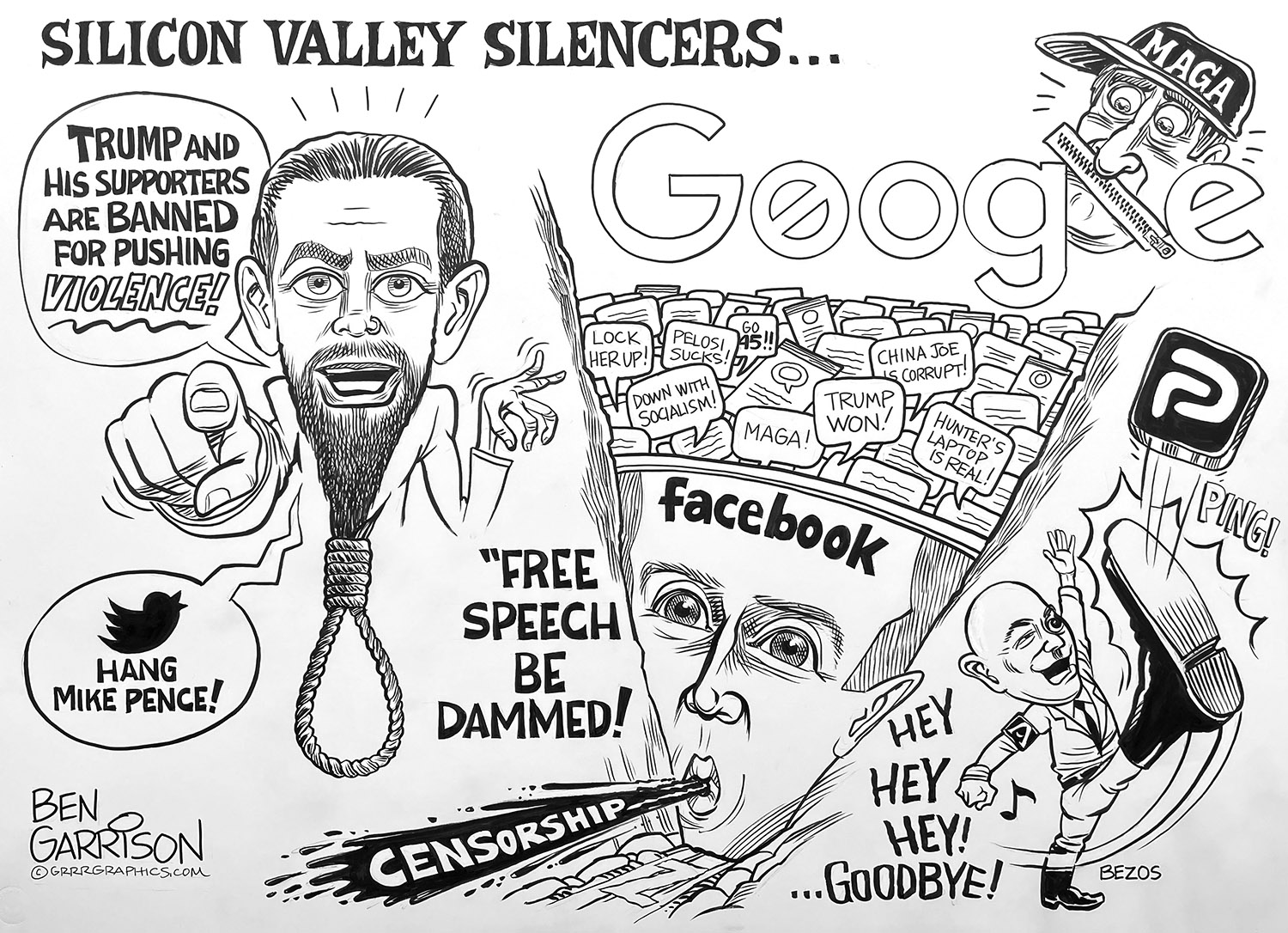 Remember this Historic date forever with a signed copy of our limited edition poster size print Can You Hear Us Now?! Order Yours Today!

GOP Cutting Off Their Potus To Spite Their Face Stars are heavier than previously thought… President Trump ordered to testify under oath in New York… Episode 1,884 – Texas: Where Were The Shooters Parents And Where Were The Cops; The Closing Of DAVOS; Our Fight AT The WHO; Elias Backs McCormick In PA