Meet Barack Obama. He is addicted to basking in the limelight. A credit taker. He’s a war monger and dark money maker. He came with a stolen social security card and a fraudulent birth certificate. Our first gay president–many say his ‘wife’ is Michael, not Michelle. (Barack himself said Michael several times when he meant Michelle.)

He had only one job—a community organizer. He came from Harvard. Obama had bad grades. How did he get into Harvard? How could he have afforded it? Perhaps through his family’s CIA ties. His grandfather was a CIA spook. His father was the notorious communist Frank Marshall Davis of Hawaii. Don’t believe me? Look him up. Obama looks a lot like him. He looks nothing like his arranged Kenyan father. Davis was also his ‘mentor.’ As a child, Obama spent a lot of time with him. Apparently his mother was OK with that. Why?

Obama spent a very brief time as an Illinois senator. He was quickly hopped, skipped, and jumped into the presidency. It was all prearranged by the global elite who whisked Barack and Hillary away for a Bilderberg meeting. They decided Obama would be the next president. Barry Soetoro the Indonesian national was so compromised, that he was guaranteed to do the bidding of the Deep State cabal.

We endured two terms of Obama talking about himself. He preened his way through his presidency while staring at mirrors and tele-prompters. He was supposed to heal the racial divide. Instead, he widened it. Many thought he would help African Americans. Instead, he took away their jobs—they were sent to China. He introduced the ’trans’ fad and legitimized it. He went after Christians and ‘bitter clingers.’ Muslim prayer rugs were brought into the White House. His CIA chief John Brennan, also a communist, converted to Islam as well. The security agencies were populated with pro-Obama people. The top brass were purged of officers who displayed reluctance to do Obama’s bidding. You know, things such as a willingness to fire on fellow Americans.

Obama bragged about how good he was at killing people. He dropped so many bombs he ran out of them. He attacked and harassed real journalists. He promised us the most transparent administration in history and then delivered opacity and deviousness. He enjoyed meeting people at locations away from the White House so they wouldn’t be logged. He lied about the farce known as Obamacare.

His sycophantic news media covered for him at every turn. Even today they claim Obama’s administration was ‘scandal free.’ Wrong. It was chalk-full of massive scandals. The corporate legacy media gave him a pass at every turn. Here are just some of his scandals:

• Uranium One scandal (colluding with Russia)

Obama’s presidency was a complete and unmitigated disaster for America. He may have left the White House, but Obama remains in the background. He’s still pulling strings, manipulating events, and tossing levers of power. Like the Clintons, he started his own foundation and is cleaning up on reward money given to him by his global banker and corporate masters. The Obamas now own several very lavish homes including one at Martha’s Vineyard valued at $12 million. Their D.C. ‘residence’ is worth $8 million. Wow, politics sure do pay off for the well-connected!

Obama is now slamming Republicans for supporting Trump. Like Hillary, he wants to go after ‘the deplorables.’ What’s really deplorable is a narcissist sociopath who considers himself to be the center of the universe. Obama wants to be able to continue to punish America—and he expects to be worshipped for it. I will not be buying his new book. Besides, like his previous book, it probably wasn’t even written by him.

Obama, you’ve got a new book, “but you didn’t build that.” 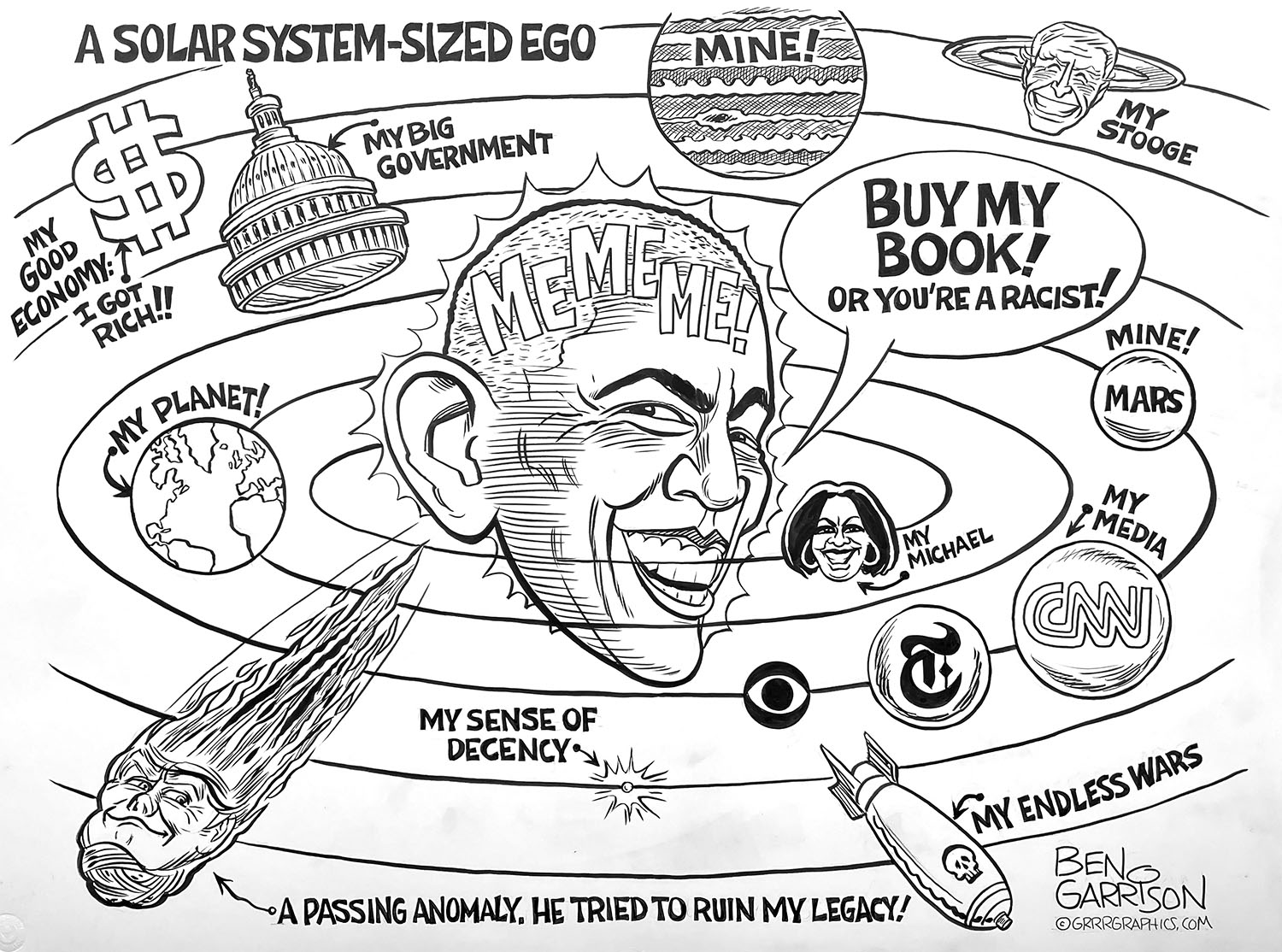 Calendars will be available soon!

WANT TO SUPPORT CARTOONS IN A FUN WAY? SEND A VIRTUAL CUP OF COFFEE! WE LOVE OUR COFFEE STRONG- CLICK TO SEND A CUP!